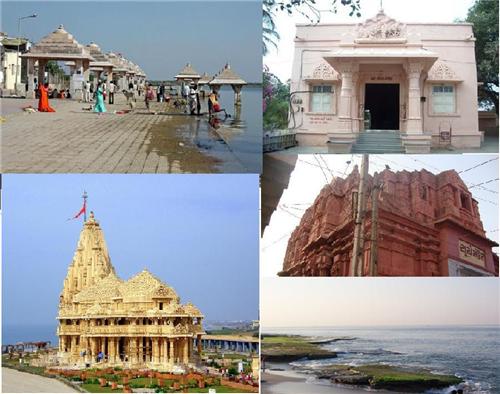 With the emergence of independent India, Veraval became a municipality and lost some of its glory and importance because of the rise of Surat, prior to which the municipality was especially known for its port activities. Primarily regarded as the major port for people making the voyage to the holy land of Mecca then, the municipality now sits quiet enclosing within it the old heritage of the Nawabi palaces with monumental forts and its gates and serves as the resting point for people on pilgrimages to the Somnath Temple and Prabhas Patan and Bhalka.

Veraval offers a plethora of temples and religious spots to the locals as well as the tourists. Thousands of visitors throng at the renowned temples in Veraval namely- Gita Mandir, Suraj Mandir, Lakshminarayan Temple, Parshuram Temple, Kamnath Mahadev Temple and last but not the least is the Somnath Jyotirlinga Temple.

Somnath Temple is hailed as one of the twelve Jyotirlingas of Lord Shiva; it is the prime attraction near Veraval. Most tourists visit Veraval especially to visit this temple. Reaching this temple is very easy as it is just 6 kms away from the city of Veraval.

Gita Mandir is an attractive temple devoted to Lord Krishna. According to the legends, Shri Krishna walked up to this place after being injured by Jara(a hunter) at the Bhaluka Tirtha. The most noteworthy feature of this temple are the 18 pillars made of marble which hold the eighteen Adhyays of “Bahgwad Geeta” in the form of imprints.

The Laxminarayan Temple is located near Veraval in Somnath and lies next to the Geeta Mandir. This temple is devoted to the deities Laxmi and Vishnu. This pious temple is valued for preserving the heavenly Shreevigraha of Lord Laxminarayan.

The Suraj Mandir in Veraval is devoted to God “Sun”and is positioned at the North of “Triveni Ghat”. The most remarkable aspect of this temple is it’s “Bravura” architecture bedecked with the glittering motifs of elephants, lions and other animals and birds.

Devoted to Lord Parshuram, the Parshuram Temple is located at the Triveni Ghat and lies at a distance of five kilometers from the temple city of Somnath near Veraval. As per the locals, Lord Parshuram performed penance to pay tribute to Lord Somnath to get liberated from the sin of killing a Kshatriya.

The main attractions within the city due to which a plethora of tourists visit Veraval every year are:
Know more in Places to visit in Veraval.

Veraval treats its visitors with a plethora of reasonably priced hotels, budget hotels and resorts. All these hotels are equipped with the modern-day facilities. Among the budget hotels The Park Hotel and the Safari Resort are worth mentioning. Among the reasonable hotels Hotel Woodland, Hotel Madhuram, Hotel Anand Inn, Hotel Radhika, Hotel Rajdev and Hotel Kaveri stand out from the crowd. Apart from this Hotel Shubh Suvidha, The Grand Daksh and Hotel Sukhsagar are also some notable hotels in Veraval which are the most sought-after and highly recommended accommodations for the tourists.

Apart from having the most cozy and spacious AC and non-AC rooms these hotels also have hygienic and pristine restaurants which serve the most scrumptious cuisines. The Grand Daksh hotel in Veraval offers a banquet hall and a huge multipurpose hall for its guests. This hall can be used for celebrations, business conferences, family get-togethers, dealer meetings or any kind of gathering. Hotel Shubh Suvidha also offers the sight-seeing facility which helps the tourists to enjoy visiting the places in and around Veraval.

In order to facilitate the tourists with an excellent sightseeing experience, the Government has offered various options to travel in and around Veraval. With the help of efficient rail, road and bus services in Veraval the tourists can now travel to and fro Veraval without any hassle.

Buses are the cheapest mode to travel in and around Veraval. All the nearby cities and towns can be visited from Veraval by taking AC as well as non AC buses available at the S T Bus Stand in Veraval. Surat, Anand, Ahmedabad, Vadodara and Rajkot are a few destinations which can be reached from Veraval via bus service. Trains like Vrl Tvc Express, Veraval Pune Express, Vrl Bct Passenger Express and Somnath Express take passengers to the major cities of India like Pune, Ahmedabad, Diu and Rajkot. Auto rickshaws and taxis are among the other local transport options which the tourists can avail to travel within the city.

In order to make your travel more comfortable and hassle-free you can get in touch with the Travel Agents in Veraval.