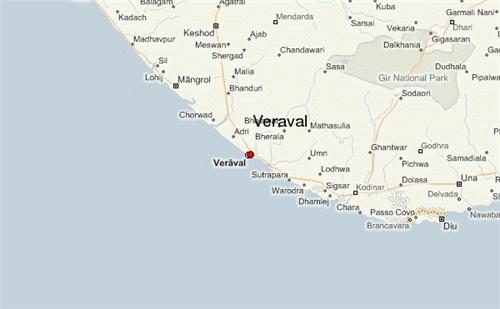 The city of Veraval is located in the district of Junagadh in the state of Gujarat and is the headquarters of Gir Somnath district, which is about 6 kms from Veraval. It was founded in 13th century by Rao Veravalji Vadher a Rajput. Since Veraval is located near the coastline of Gujarat, it is lined with many beaches. It is an important railway station since it connects to all major sections namely Ahmedabad, Pune, Baroda, Jabalpur, Rajkot, Ratlam, Ujjain, Trivandrum and Mumbai.

The nearest airport for Veraval is in Rajkot and in Chorwad. The port town of Veraval was an important landmark in the days gone by, as it was one of the main ports along the coast. It was the only departure centre for Muslims to travel to Mecca before the port of Surat was opened. The Gujarat coastline has been a focal point for traders and invaders for centuries. The Shiva Temple at Somnath, which holds a naturally occurred Shiva Lingam, has been a landmark to mariners from time immemorial.

Area and Population of Veraval

Veraval as like the other cities of Gujarat has a predominant Gujarati population. Of these the Gujaratis, the Kharwas and the Kolis form a majority of the local population besides one can also see many Malyalees and Sindhis.   The main language is but naturally Gujarati and Hindi. There are 56 villages of Veraval talukas.  The population of the town of Veraval is approximately 163 336 people out of which males form 51% of the population and the balance 49% are females.  The average Literacy rate is 62%, out of which males constitute 71% and females 53%.

The climate of Veraval is mainly warm to very hot with a record high of 42 degrees Celsius in summer and a minimum of 7 degree Celsius in winter. It has a semi-dry-hot type of climate throughout the year with an average humidity level of 74%. The place gets rainfall from the South West monsoon during the months of June, July, August and September. The months of July and August receive the most amount of rainfall. The months of October and November receive some rainfall and are the beginning of the tourist season.

The following characteristics contribute to the physical features of Veraval:

The most spectacular sight of Veraval is the fishing port, where thousands of trawlers can be seen unloading their catch. It is quite safe to swim at the beaches of Veraval. Tourists can also enjoy camel rides and mouth-watering seafood of sufficient good quality. Existence of famous religious and traditional sites makes Veraval a great travel destination for the tourists seeking peace and enjoyment in their vacation.

The most famous excursion from Veraval is of course the Sasan-Gir(or Gir national park & wildlife sanctuary), which occupies an area of 1412 sq km and is one of the most important wildlife preserves in India. Gir is about 79 kms away from Veraval city. The huge expanse of deciduous forests, rolling grasslands and Acacia thorn scrub forests offer great wildlife viewing. 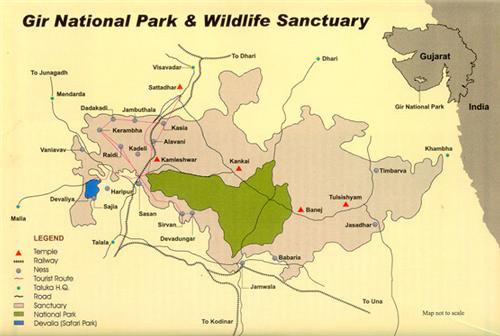 One can see panthers, the black- bucks, the handsome spotted deer, the magnificent sambar, The Wild-Ass, Indian Wolf and many more animals besides lots of bird-life like Great White Pelican, Great Cormorant, Red-necked Grebe, egrets, flamingos and a lot more.

People mostly link Gir with "Maldharis" who have survived through the ages by having staying in harmony with the lions. Unlike the other big cats, the lion is tolerant of the presence of the human beings and it even lives near the human settlements. The Maldharis are a religious pastoral community living in Gir. Their settlements are called "nesses". At present, the Gir forest of Gujarat is the only natural place where the Asiatic lion is found.

Teak bearing areas are mainly in the eastern portion of the forest, which constitutes nearly half of the total area. The forest is an important biological research area with considerable scientific, educational, aesthetic and recreational values. The forest provides nearly 123,000 metric tons worth of fuel wood annually.

Many mineral-based industries have emerged in the western coastal area at Veraval and its nearby places like Porbandar and Bhavnagar. Good quality of limestone is available in the area in plenty. Therefore, mineral based industries, such as Soda ash, Cements, Chemicals, etc, have developed in the area in the last few years. The other Major industries of Veraval are Cement, Refineries, Chemicals and Edible oil.