The city of Veraval is occupied by majority of “Gujaratis” and hence the city represents the true culture of Gujarat. Apart from Gujaratis, Rajwadi bhoi’s, Patnis, Turks, Maleks, Kolis and Kharwas also dwell in the city in a considerable amount. Sindhi and Malayalee population also occupies a part of the city. The main languages that are spoken in this region are Hindi and Gujarati.

The Gujarat state has flourished with the passage of time and consequently the smaller cities of the state like Veraval is also witnessing a boom as well. Although Veraval is on the way of advancement, the residents are entrenched to their ancient customs. Basically the Veraval people are full of life and are inclined towards religious practices.

Fairs and Festivals of Veraval

Veraval feels proud to celebrate a variety of festivals and fairs to honor its rich Gujarati culture. The following festivals are celebrated in Veraval with great enthusiasm: 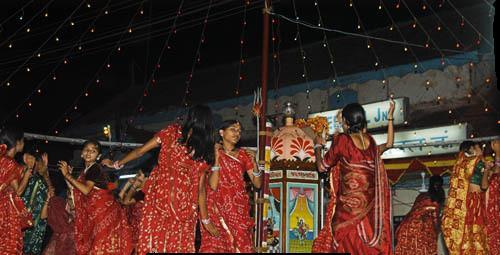 Apart from these, festivals like- Janmashtami, Maha Shivaratri, Diwali, Holi, Christmas and Eid are also rejoiced in the city of Veraval.

The main features of these fairs are- stalls exhibiting the Gujarati embroidery, jewelry, traditional costumes with mirror work and embroidery, handicrafts, brass and copper utensils, magic shows and enjoyable rides for kids. Folk dances and music are also the main highlights of these fairs.

Music and Dance in Veraval 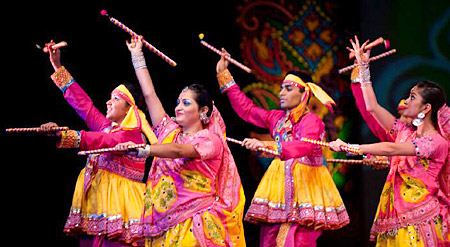 The rich culture of Gujarat is truly represented by the folk dances, songs and dramas which find their origin from the epoch of Shri Krishna. The “Bhavai” is the famous folk drama which is performed in various parts of Gujarat.

In the arena of music there is a huge contribution of Gujarat. There are various Ragas which possess the names of different territories of Gujarat like- Bilaval raga (from Veraval), Khambavati( from Khambhat), Gujaqri Todi, Sorathi (from Sorath), Lati and Ahiri ragas. Communities like Gadhavis and Charans have contributed a lot in the folk music in order to conserve the tradition of Gujarati folk music. Apart from the ragas, the festive songs, lullabies, Rannade songs and nuptial songs are a few among the various kinds of Gujarati folk songs. Among the religious music forms Haveli sangeet and Bhajans are quite famous.

The people of Veraval are full of energy and they love to celebrate the vibrant festivals by performing a variety of Gujarati folk dances. The Garba, Dandiya Raas, Padhar and Garbi are the various dance forms performed at Veraval during various dance events and festivals like Janmashtami and Navratri.

The rural women in Veraval are skilled at traditional Gujarati embroidery, mirror work and zari work on “Bandhni” sarees, salwar suits, “Ghagra Cholis” and other traditional costumes. Since the Gujaratis in Veraval are deep-rooted to their old customs, the embroidery and other local crafts of Veraval are taught to the women within the families also. During the various fairs these local crafts are exhibited and are appreciated by a plethora of tourists from all over the world.

Apart from the embroidery, decorative wall hangings, silver jewelry, beautiful beadwork and hand weaving is also performed by the village women residing in and around Veraval.

Boat building is the traditional craft of Veraval which is very famous in the port town of Veraval.  The process of making the fishing boats has remained same since a long time. The fishing craft in the Veraval region is known as “Veraval Machuwa”. 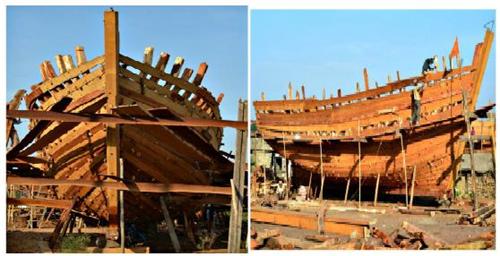 Veraval boasts of several remnants of Nawabi forts and gates situated in and around the city. The architectural heritage of the city of “Nawabs” is represented by the famous “Nawabi Palace”. This palace is an example of Gothic style architecture. The city now holds only a few remains of this beautiful palace. This palace was transformed into a college after the Nawab had abandoned it and now it is popular as “Somnath College”.

Veraval is said to be the gateway to the splendid Somnath temple in Somnath which is located at a distance of 5 km from Veraval. The gorgeous temple of Somnath has a magnificent architecture with conventional design.

The Prabas Patan museum is an outstanding museum in Somnath which is located at 7 km from Veraval. The museum holds the remains of art treasures, holy waters of different rivers, old temples, pillars, sculptures of Goddesses (Parvati, Natra Bhairava and Uma Maheshwara) and Gods (Lord Vishnu and Agni), old stone apsaras and toranas from 12th century. Apart from this the Prabas Patan museum also includes the remnants of the 11th century’s old Somnath temple.

Explore more about Culture of Veraval